I’ve been visiting some old familiar websites, hoping to reactivate my gray matter after months of recovery from two spine surgeries and too many pain killers. After a while I stumbled across the question The Edge Foundation asked of ten prominent people from the worlds of science, philosophy, psychology, and physics: “What have you changed your mind about?” The answers were inspiring. 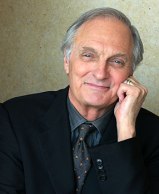 Not surprisingly, the great thinkers who answered the question included Alan Alda, who hosted the television shows “Scientific American Frontiers” (1993–2007) and “The Human Spark” (2010). Although he is an accomplished actor, he has always loved science and learned much during eleven years of interviewing six or seven hundred scientists around the world. His answer encouraged me to think, and change my mind.

“So far, I’ve changed my mind twice about God”

“Until I was twenty I was sure there was a being who could see everything I did and who didn’t like most of it. He seemed to care about minute aspects of my life, like on what day of the week I ate a piece of meat. And yet, he let earthquakes and mudslides take out whole communities, apparently ignoring the saints among them who ate their meat on the assigned days.  Eventually, I realized that I didn’t believe there was such a being. It didn’t seem reasonable. And I assumed that I was an atheist.

As I understood the word, it meant that I was someone who didn’t believe in a God; I was without a God. I didn’t broadcast this in public because I noticed that people who do believe in a god get upset to hear that others don’t.. . .”

“. . .I still don’t like the word agnostic. It’s too fancy. I’m simply not a believer. But, as simple as this notion is, it confuses some people. Someone wrote a Wikipedia entry about me, identifying me as an atheist because I’d said in a book I wrote that I wasn’t a believer. . .”
— Alan Alda

Inspired by Mr. Alda’s comments, I had to ask the question, “am I still an Atheist?” In my post from last month I reiterated my self-labeling by explaining what I’ve been saying for 25 years, “I’m an Atheist, but more importantly, I’m a Secular Humanist.”

But ya know, Alda’s onto something. I’m so frustrated by having to explain the various definitions of the word “Atheist.” I’m tired of seeing the shocked stares when I proudly say that I’m a devout Atheist. I do so enjoy riling people up by using the word devout next to the word Atheist. However, I’d much rather focus my efforts on talking about Secular Humanism. Perhaps they will listen if I didn’t use the “A” word?

So after 25 years I’m changing my mind. Like Mr. Alda I’m content to label myself simply as a non believer. But now I must try it on and wear it around for a while. I can’t wait to test it on my friends. . .and certainly in public!

Are you an Atheist or a non believer?

The 2015 question at The Edge is “What Do You Think About Machines That Think?” There are 186 individual, printable responses. Ideas. Ideas. Ideas!

Why Ricky Gervais is an Atheist (or, Non Believer, if you will)