Around this time of year, people make toasts with wishes and hopes for the New Year. Certainly we all hope our year goes smoothly. However, some folks will do all kinds of superstitious things like consulting their horoscope or seeking “professional” help from a soothsayer (old-timey talk for a “fortune teller,” you know, like Professor Marvel in The Wizard of Oz). According to the dictionary, a superstition is “an irrational fear of what is unknown or mysterious, especially in connection with religion, or any blindly accepted belief or notion.”

It’s true: life is mysterious. And, because there are so many things about the natural world that people don’t understand, we often ascribe our own meaning to these mysteries. Unfortunately, since we humans are so superstitious, we have invented a myriad of convoluted trickeries and procedures to explain the inexplicable, to protect ourselves from bad luck, or to provide a peek into the future so that we know what to expect.

Before we leap into the new year for personal predictions about your life (I’ll tell you how to go about that in a minute), let’s take a deep dive into the fortune telling world.

Good Luck/Bad Luck
♦  crossing your fingers or knocking on wood for good luck
♠  avoiding bad luck by NOT crossing the path of a black cat
♣  a lucky rabbit’s foot charm
♥  convinced that bad luck comes in threes
♦  breaking a mirror means seven years bad luck
♠  actors say it’s bad luck to say the word “Macbeth” while inside a theatre
♣  never put shoes on a table
♥  Friday the 13th is an unlucky day
♦  Look out for ravens, crows, and magpies. You remember this, right? “Quoth the raven,  ♠  ‘Never more.’”  (The heartwarming tale of a defective verb)
♥  Don’t forget those “Lucky Symbols” – here’s a link: Lucky Symbols

FORTUNE TELLING – TOOLS OF THE TRADE
∞ – Palmistry
∞ – Tarot cards
∞ – astrology/horoscopes
∞ – psychic readings/clairvoyance
∞ – phrenology
∞ – crystal readings, healings
∞ – metaphysical readings
∞ – ESP
∞ – herbal healing
∞ – rune reading
∞ – aura reading
∞ – numerology
∞ – and I almost forgot, Tasseography, the reading of the tea leaves left in the bottom of          the cup (what have I left out?)
∞ – Oh yes, the Ouija Board
∞ – And, have you heard about an octopus named Paul II at the Sea Life Aquarium at                Oberhausen? People there use him to predict the outcome of matches played by the          German national football team.
∞ – I have to admit, I never heard of this fortune-telling method: Ureamancy, a way to              foretell the future by gazing upon the foamy froth of urine created within water.

**** I think I’ll leave the belief in malediction (putting a curse on someone) alone for                 now. Although I can think of various politicians who do need a comeuppance.

THREE SHORT EXCERPTS FROM AN INTERVIEW WITH KURT ANDERSEN

Three excerpts from “How The Loss Of Critical Reasoning Is Harming America,” an interview with Kurt Andersen by Michael Werner, from The Humanist, The Magazine of the American Humanist Association – Jan/Feb 2018. They discuss Kurt’s latest book, Fantasyland: How America Went Haywire:
A 500-Year History.

MICHAEL WERNER: Your new book, Fantasyland: How America Went Haywire: A 500-Year History, is a theory about how the triumph of the radical right, and Donald Trump in particular, are only part of the culmination of a long historical process. Can you explain?

KURT ANDERSEN: We began, of course, as an Enlightenment nation and in our school histories we have most emphasized that proud and self-flattering part of our history. Thomas Jefferson, John Adams, and Benjamin Franklin were certainly people of the Enlightenment, but the strange bedfellows of the American idea were these passionate beliefs in the untrue and unprovable held by the Puritans, in their theocracy of the Massachusetts Bay Colony, and by the gold hunters in Virginia who, despite no evidence, kept assuming they were going to find gold.

So we began in this new world wishing with all our hearts that this place we imagined as the empty slate could fulfill all the dreams and fantasies the English settlers had, whether they were dreams of a supernatural New Jerusalem and Garden of Eden or dreams of instant wealth, El Dorado. We codified that essential American ultra-liberty and ultra-individualism: “I can believe whatever I want,” which is a residue of the Enlightenment. For most of our history the people in charge of our political and cultural establishments generally kept the various forms of magical thinking, extreme religion, and religious delusion from getting out of control.

There’s a good side to dreaming the impossible dream, which is part of what made America grow and accomplish so much. The downside is that religion has always been more extreme in this country than other places in the developed world. Alexis de Tocqueville observed that, but it has become more and more extreme, especially in the last half-century. It’s not just religious myths of 2,000 years ago—there are beliefs in supernatural events and magical happenings today that simply aren’t widespread elsewhere in the developed world. Over the last century, and especially the last few decades, our divergence from what we used to call the rest of the civilized world has become extreme. . .

. . . Had Trump not been elected, everything I say about Fantasyland would still be true. I just wouldn’t have the convenient vessel that Donald Trump provides to illustrate what I’m talking about. . .

. . .we have to share a common set of facts based on how empirical reality has been understood for the last millennium or so.”

Q: How to find good luck in 2018?
A: Focus on “empirical reality” and never go to a fortune teller or psychic.

NEXT UP: I had so much to share on this one, I had to divide into three posts. Look for my upcoming posts about the “Intersection of Superstition and Religion,” and “Amazing Stories of Evil Fortune Tellers.”

UNEARTHED FROM ONE OF MY PHOTO ARCHIVE BOXES
When I lived in LA I kept a camera in the car. Every time I saw a store front like those below, I would take a picture. These are real. After a while I gave up because there were so many. This post finally gives me the opportunity to share those photos in a constructive way. By showing them I hope to put a curse on fortune tellers. Or at least by mocking them, dissuade you from ever going to one of these bandits. How many people frequent these joints? There must be hundreds of people going to these dives every week. Apparently, there are enough people to pay the rent and utilities and provide some income. It’s a puzzlement to me. There must be a lot of superstitious suckers out there! 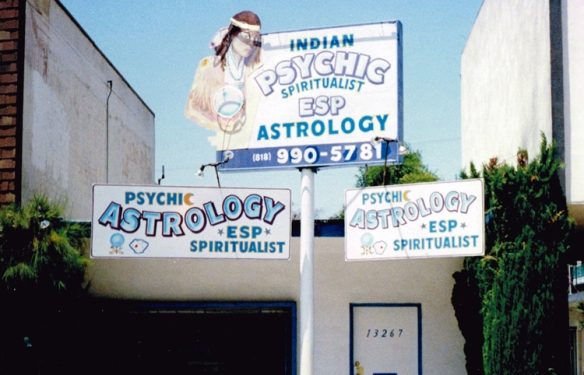 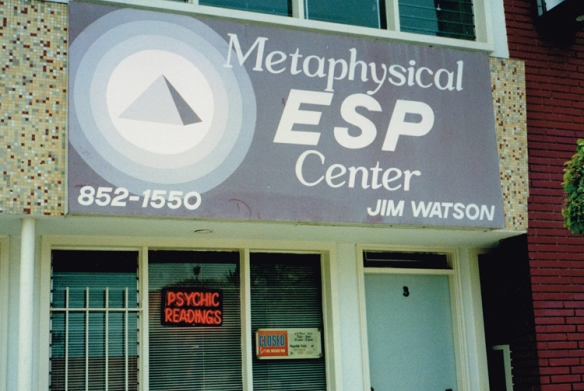 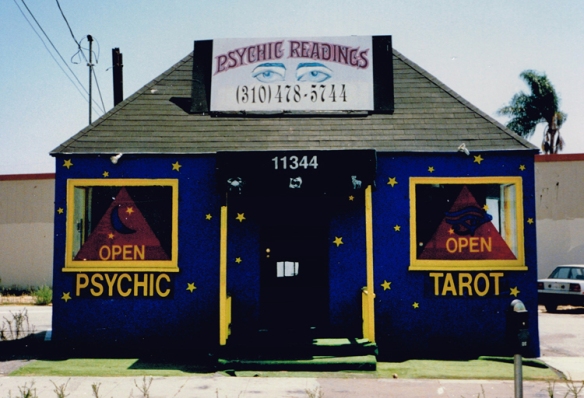