Destiny is such a small word, and yet it causes so much trouble. Recently I’ve been pondering its insidiousness. Why does it keep forcing its way into my thoughts from a dozen different directions? From where does it come? Who is responsible for it? And how can I keep its promise from becoming a foregone conclusion, which, as the dictionary says, is “a conclusion formed in advance of argument or consideration?” Is my life simply a fait accompli, an open and shut case, a done deal, a fact of life, a grim reality, an irreversible act, a matter of fact? I DON’T THINK SO!

It’s always good to begin with a definition. What does it say about “destiny” in the dictionary? I’ll tell you. It’s the “inevitable or necessary fate to which a particular person or thing is destined; one’s LOT.” Then, more importantly, it goes on to clarify: “a predetermined course of events considered as something beyond human power or control.” And finally, “Destiny: the power or agency thought to predetermine events.” Wait a minute. Who is it, exactly, that’s got the power? “Or Agency?” Agency? Could it be the IRS?

This hideous (dripping with sarcasm) “destiny concept”. . .forces itself into our lives and is reinforced in phrases that we use in everyday conversation: 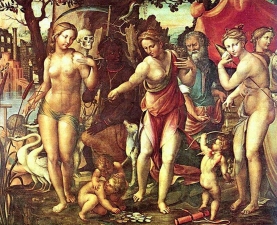 * A man dies. What do we say, “I guess his number was up.” Or, “It was meant to be.” Or, “His time had come.” And so we shrug and say, “That’s his fate.” His fate?! Look it up! Are you saying the man dropped dead because of three half naked Greek Goddesses named Clotho, Lachesis, and Atropos? It must have been some party, huh! I don’t buy it.

* A little boy grows up to become a brilliant concert pianist and the mother says, “He was born to be a concert pianist.” Now there she’s half right because we know that a good portion of his talent came from his genes, from all of his ancestors boiled down into him. But the other part of his brilliance didn’t come from DESTINY, it came from a lot of hard work on his part. And then she really ruins it by saying, “what a wonderful God-given talent.” No, he got his talent from his parents and from years of practice.

* An infant dies of a rare disease. People say, “It was for the best.” Or, “There has to be a good reason. We just don’t know what it is. In time, it will be revealed to us.” SORRY, when an infant dies, it’s a tragedy, pure and simple. Of course, we need to find a way to cope with our loss, but pretending that a supernatural deity did it on purpose and is then making us guess why…is just the (sing-songy) SILLIEST THING! …and I cleaned that up!

* Your house burns down. Your friend says, “It’s part of a larger plan.” Right. It was arson.

* And of course with the hurricane Katrina tragedy, I already heard on the radio that religious fanatics are claiming that the devastation along the Gulf Coast was a punishment by God for the sinful ways of all those people.

Plan, schman!? That is not only crazy, but incredibly stupid. All these clichés are the residual effect of thousands of years of primitive superstitions and religious make-believe. Of course it’s human nature to try to explain things you don’t understand. But, come on…it’s the 21st Century. Even if we can’t explain everything, why do we have to hold on to this ancient fantasy of an all powerful Zeus somewhere up there on a mountaintop controlling everything we do? We’re so pathetic. Why don’t we just perpetuate belief in the Tooth Fairy, Easter Bunny, Santa Claus, and angels? Oops…we do.

Unfortunately, the concept of destiny is everywhere. And it’s sneaky. Destiny is like an evangelist in sheep’s clothing. Propaganda, pure and simple. It’s everything I reject. It’s antithetical to my philosophy of life. Yet I can’t get away from it. I have to deal with it every day. People want to talk about fate, about horoscopes, about karma, or past lives.

As a Humanist, a freethinker, the first thing I must do is THINK. OK, so after countless cups of coffee I achieved my target heart rate for the day, and I concluded that there are two reasons humans hold onto destiny with such a death grip. The first reason has to be EGO! Here’s a quote from The Happy Heretic, Judith Hayes. It’s from a piece she wrote entitled “Body and Soul”: “The human soul. It is invisible. Undetectable by any human means… But the majority of the human population nevertheless is convinced that it exists. They believe there is such a thing as the human “soul.”…we don’t want to be just like all other animals…who simply die. Who wants to stay dead? Surely we are far more important than other animals. Surely we are connected somehow to the eternal Cosmos. Surely we have a “soul.”…The human ego knows few bounds. My, we’re important!”

The idea of Destiny is PURE EGO. Our ginormous egos tell us we’re so important that there’s a god up there somewhere so concerned about ME that he took the time to make a specific life-plan with my name on it. And the plan is called my “destiny.” I guess I rate pretty high in his book, huh? It’s true. “The human ego knows few bounds.”

The Beatles with Maharishi Mahesh Yogi

There’s this romantic notion from the 60’s & 70’s that there are many ways to find your spiritual center. After all, the Beatles tried several different ways. Oh, pa-lease! “Spiritual.” What does THAT word mean? Just look it up. Here ya go; right out of the Dictionary…

(italics are my own comments):Spiritual:

(yelling up at the heavens) Can we have some SCIENCE, PLEASE! Science was invented some time ago now, you know. Cause and effect have been written about and studied in every high school, college, and university. Shouldn’t science have eliminated this supernatural canker, Destiny? By now it should be gone, but it isn’t.

The destiny concept is actually so deeply embedded in our culture…that. . .(loudly and creepy like a soothsayer)

“It may take a Humanist exorcism to save us…”

(step toward the audience, making a mock Humanist blessing gesture [there is no such thing] and sprinkle some water on a volunteer helper [it’s just fun to get them wet].)

And now the ritual sayings:

I summon Daw Aung San Suu Kyi:
We achieve everything by our efforts alone. Our fate is not decided by an almighty God. We decide our own fate by our actions. You have to gain mastery over yourself… It is not a matter of sitting back and accepting.

I summon John F. Kennedy:
Our problems are man-made, therefore they may be solved by man. No problem of human destiny is beyond human beings.

Hmmm….. “destiny is a thing for me to achieve.”

(exorcism over)  I feel better already.

I suggest the way to find a “spiritual center” without the mythical spirit is to explore our human nature, the beauty of human art and music, the discoveries of science, and the wonders of our natural world. They fill you up inside. They offer the inspiration, awe, joy, and solace that we’re looking for in our quest for a spiritual life. Humanists have such a fantastic life right in front of us, without relying on mythical deities to supply it for us. It’s right here. Enjoy it.

These Humanist concepts were not given to us by an outside force. We had these good ideas within us. We humans don’t need the threat of punishment to do good. We know right and wrong when we see it. We don’t need the promise of an afterlife to be good. The point is to do good now, not because we get a prize later, but because it’s the right thing to do. We’re smart enough and fully capable of being good…and doing good…simply by exploring the good side of our human nature.

I don’t believe in ancient superstitions. The words “destiny” or “fate” are dirty little words because they lead us down a path away from our responsibility to be “the best and noblest that we are capable of as human beings.”

I have promised myself that I will attempt to refrain from uttering all clichés related to the concepts of destiny or fate, and that, when necessary and appropriate, I will share the Humanist point of view with others.

I was not born a Humanist. I did not have Humanism thrust upon me. I chose to achieve the best that I’m capable of as a human being. . .all by myself.

Promise never to say the word “destiny” or we’ll just have to wash your mouth out with soap!

2 thoughts on “DESTINY IS A DIRTY WORD”