(Updated/totally revised post from 2012,
with additional cartoons & a video with Hugh Laurie and Stephen Fry)

Religions claim to be good and good for you. But first they require you to accept their view of the world. They demand a belief in their god; belief in that God’s sacred book; belief in that god’s explanation of how to seek redemption (because we’ve been told relentlessly that we’re bad); belief in the promise of heaven and the threat of hell; belief in peculiar dietary laws; some, even a belief that your genitals should be altered in a certain way. Let’s face it, many religions tell you how, when, and with whom to have sex. . . or not to have sex.

Yes, for some reason sex is very important to the gods. In fact, they’ve laid out many dos and don’ts, and described various sexual taboos. 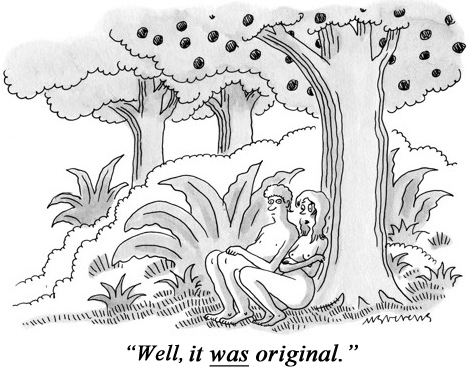 From the very beginning, the god in my Bible told me that when Adam made love with Eve, it was bad, bad, bad. The two of them must be punished (although poor Eve got most of the blame). The act of sex was declared bad from the outset and you’d better feel guilty about it. Thus, we have religion to thank for the linking of guilt to sex. Thank you so much, god.

Unfortunately, begging our god to be forgiven for our sexual sins then sadly morphed into begging for sex.

Sex continues to be incredibly important to religionists today. From anti-abortion to anti-homosexual, from Catholic priest and nun celibacy to priestly pedophilia, anti-masturbation to anti-sex before marriage – religions seem obsessed with trying to control sex. I, however, am now a secular humanist. I simply like to say that I’m “Post‐Theological.” I have exorcised that hideous religious guilt
that attempted to infect me.

Happily, a new survey has confirmed my personal experience. The headline in the newspaper read, “Sex Improves Dramatically After Leaving Religion.” The survey/study is by Dr. Darrel W. Ray, a psychologist, and director of The Institute for Performance Culture, and Amanda Brown. The survey title is “Sex and Secularism: What Happens When You Leave Religion.”

They surveyed over 14,500 American Secularists. It’s a ground‐breaking study of sexuality among the non‐religious. As stated in the editorial comment of the study, “. . .almost all religions suppress and distort sexuality in measurable increments. While most religions do not have as powerful an impact as a cult, they still have a negative impact in terms of guilt.”

The survey gave plenty of data to make some tentative conclusions about the secular community and secular sex. The most important finding shows dramatic improvement in sexual satisfaction and a decrease in guilt after people left their religions.

I suggest that the conclusion we should draw from this new survey data is: if you want better sex, become a secularist. Good sex is part of a good life. Enjoy!

In the US, many religious leaders are against sex education in schools and insist that parents and churches should be primarily responsible. Back in 1989, Hugh Laurie (from the U.S. television show House) had a skit-comedy TV show in England. Along with his old college buddy, Stephen Fry, they happily mocked how many parents resist teaching their children about sex, and object to the schools teaching it as well.

For adults only: what do atheists say in bed? The link below will take you to Jeff Swenson’s “Humanists in Love” comic. Don’t look at this if you are easily offended by sexual humor:

(Thanks to The New Yorker and those wonderful New Yorker cartoonists)