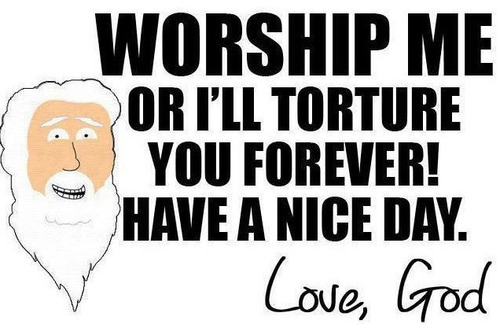 If you grew up with a God, I know she’s pretty hard to let go of. However, once you do, you’re free to just be a good human being.

It’s so rewarding to be free of “all gods and all masters. ” And to prove it, I love to say that I’m a devout atheist (just for the shock value – LOL). But most importantly, my real goad is to be a good person, a Secular Humanist.

Question: did you flinch when I used the word, “Secular?” Some people tell me that’s an off-putting word, because it’s somehow associated with atheists, and we all know you atheists are “Godless, evil people with no morals.” Of course, that position is espoused primarily by Christian fundamentalists, who don’t understand that they don’t need a god to keep them on the straight and narrow. Maybe they do. They think because atheists don’t believe in God, atheists are capable of just going off willfully, raping and pillaging across the countryside. (Really?!) Religious people are so desperate to keep you in the fold. For example, Muslims in a large part of the world even believe that they must kill apostates, those that quit the religion. As stand-up comics might say, “Tough room.”

As a cornerstone of our democracy our founders included “Freedom of Religion.” You have the right to reject any or all faith, or any or all gods.  You know what an atheist is, don’t you? Answer: someone who doesn’t believe in your god. You simply need to be your “own good self.” Practice using your empathy and compassion for other people. Out of that you will likely become a very moral person, perhaps a secular humanist.

So what’s a good definition of Humanism? Here are two:

Humanism is a progressive lifestance that, without supernaturalism, affirms our ability and responsibility to lead meaningful, ethical lives capable of adding to the greater good of humanity.
– American Humanist Association

But look at the second one as well. It reveals many more aspects of Secular Humanism to ponder. You will see that Humanists are actively trying to be good humans. That’s why we say you can be “Good Without God.” Here’s how. I also like the emphasis of the arts, which can be vehicles to understanding how to be a better person. It has one of my favorite lines as well: “Humanism is a philosophy of those in love with life.” (a quote from prominent humanist, Fred Edwords quote, I think). And finally, it has a kick-ass finish. Humanism is:

A joyous alternative to religions that believe in a supernatural god and life in a hereafter. Humanists believe that this is the only life of which we have certain knowledge and that we owe it to ourselves and others to make it the best life possible for ourselves and all with whom we share this fragile planet. A belief that when people are free to think for themselves, using reason and knowledge as their tools, they are best able to solve this world’s problems. An appreciation of the art, literature, music and crafts that are our heritage from the past and of the creativity that, if nourished, can continuously enrich our lives. Humanism is, in sum, a philosophy of those in love with life. Humanists take responsibility for their own lives and relish the adventure of being part of new discoveries, seeking new knowledge, exploring new options. Instead of finding solace in prefabricated answers to the great questions of life, humanists enjoy the open-endedness of a quest and the freedom of discovery that this entails.
– The Humanist Society of Western New York