We must take a stand on raising the minimum wage in the U.S. If we help to raise the minimum wage, we will raise hundreds of thousands of minimum wage workers and their families out of their forced poverty. The objections and arguments against raising the minimum wage are presented by those in business that must keep the wages as low as possible so that they can make huge profits. We get that. But they are doing so on the backs of the most poor among us. It seems unconscionable to me, given these two principles of Humanism:

“We are concerned with securing justice and fairness in society and with eliminating discrimination and intolerance.”

“We believe in supporting the disadvantaged and the handicapped so that they will be able to help themselves.”

(Although this 1923 cartoon is old news, the issue of the minimum wage law is still alive today. Justice Sutherland wrote the majority opinion that the minimum wage law for women violated the due process right to contract freely. D.C. Court of Appeals affirmed. Today, both men and women are still being kept in poverty.)

President Obama has proposed a new minimum wage of only $9 per hour, while Sen. Tom Harkin (D-Iowa) and Rep. George Miller (D-Calif.) have rolled out their own, more ambitious proposal, which by 2015 would raise the minimum wage to $10.10, closer to its historical high in the late 1960s.

“Even with the tax relief we put in place, a family with two kids that earns the minimum wage still lives below the poverty line,” Obama said. “That’s wrong.” 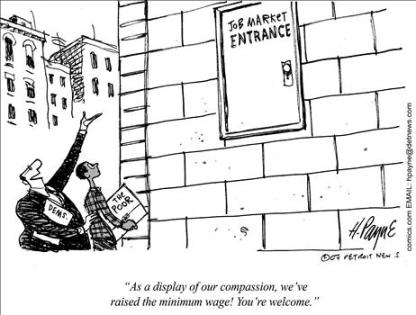 Below are just a few links to get you started:

THEN BE VOCAL IN YOUR SUPPORT OF RAISING THE MINIMUM WAGE.