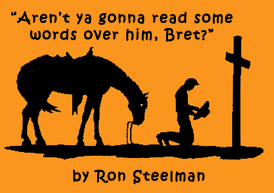 Introduction
You’ve seen the classic western film where one of the good guys gets shot by one of the bad guys. They’re out in the middle of “nowhere big sky country.” There’s no way they can get their dead sidekick (the cowpoke who weighed 300 pounds yet they called him Slim) back to town to the undertaker (a twitchy little guy named Aloysius P. McCreepy,
who sported a glass eye). They’re stuck.

They must follow the rules of the Olde West and bury their stiff compatriot right there where their horses stopped. The movie screeches to a halt while they supposedly dig a grave and plunk him “six feet under.” They must bury him right away for two reasons: the beautiful heroine with the ripped skirt really likes Slim’s horse, plus they’d hate
to see Slim devoured by the buzzards lurking overhead. Since the director of the film realizes that cowboys never carried shovels, making the audience watch the gang dig a six foot hole with their bare hands would not win him an Oscar. He wisely skips that scene and jumps to the scene where they are about to plant a rough‐hewn cross in the rocks they piled on top of good old Slim. At this point they start to saddle up, but the chick who’s showing too much leg (for this period in history) turns to our hero and says, “Aren’t ya gonna read some words over him, Bret?”

Bret turns to Cookie, a smiley and smelly old geezer with a limp, with the brim of his grungy cowboy hat turned up in front. Bret says, “Cookie’ll say’em betterin’ me.”

The camera cuts to Cookie, the chef who ritually burns the beans and biscuits. Cookie gives Bret a dirty look. But when Cookie eyes the gal’s legs and she gives him a big smile, he caves. He says, “Well, I ain’t got no Good Book, so I’ll just say what I always say at times like these.”

As Cookie looks to heaven and opens his mouth to say his favorite “few words,” an arrow zings through the top of his rumpled hat, sending it flying.

Cookie yells, “Dang nabbit,” grabs an enormous black skillet to shield his head, as another arrow ricochets off with a clang. . .

The Main Part – About the New Bible
Speaking of the “Good Book,” aka, the Bible, the world now has a new one. This tome is not for religious people, though. It’s called The Good Book – A Humanist Bible, by A.C. Grayling, the noted British philosopher. It’s important to note that there’s no mention of God or other supernatural phenomena in this book. The following description from Amazon.com provides a
concise overview of the book.

“Few, if any, thinkers and writers today would have the imagination, the breadth of knowledge, the literary skill, and yes‐the audacity to conceive of a powerful, secular alternative to the Bible. But that is exactly what A.C. Grayling has done by creating a non‐religious Bible, drawn from the wealth of secular literature and philosophy in both Western and Eastern traditions, using the same techniques of editing, redaction, and adaptation that produced the holy books of the Judaeo‐Christian and Islamic religions. The Good Book consciously takes its design and presentation from the Bible, in its
beauty of language and arrangement into short chapters and verses for ease of reading and quotability, offering to the non‐religious seeker all the wisdom, insight, solace, inspiration, and perspective of secular humanist traditions that are older, far richer and more various than Christianity. Organized in 12 main sections‐‐‐‐Genesis, Histories, Wisdom, The Sages, Parables, Consolations, Lamentations, Proverbs, Songs, Epistles, Acts, and the Good‐‐‐‐The Good Book opens with meditations on the origin and progress of the world and human life in it, then devotes attention to the question of how life should be lived, how we relate to one another, and how vicissitudes are to be faced and joys appreciated. Incorporating the writing of Herodotus and Lucretius, Confucius and Mencius, Seneca and Cicero, Montaigne, Bacon, and so many others, The Good Book will fulfill its audacious purpose in every way.”

As Stephen Colbert said in his goofy, faux‐far‐right interview of A.C. Grayling, “How can this be a Bible if there’s no God in it? Is this book against God and religion?” 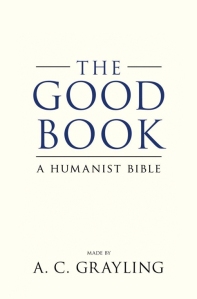 A.C. Grayling answered, “There’s nothing in this book against religion. It’s just a different take on how we live the good life and about ethics, really. The point is we have to take responsibility to think carefully for ourselves about what kind of values we pursue in life and how we form really good relationships with other people.”

Without exploring the premise that the traditional Bible itself is not actually a “good” book, I must say that Grayling’s The Good Book seems to truly be a good book. I also discovered that you can read it from cover to cover, or pick it up and consider one page at a time. Throughout, it is a “good book,” filled with wisdom and advice on how to be good and how to live the good life. . .without a deity.

(An Excerpt)
Here is the last chapter of the last book in Grayling’s The Good Book – A Humanist Bible:
“1. Seek always for the good that abides. There can be none except as the mind finds it within itself;
2. Wisdom alone affords everlasting and peace‐giving joy, for then, even if some obstacle arises,
3. It is only like an intervening cloud, which floats beneath the sun but never prevails against it.
4. When will you attain this joy? It will begin when you think for yourself,
5. When you truly take responsibility for your own life,
6. When you join the fellowship of all who have stood up as free individuals and said,
7. ‘We are of the company of those who seek the true and the right, and live accordingly;
8. ‘In our human world, in the short time we each have,
9. ‘We see our duty to make and find something good for ourselves and our companions in the human predicament.’
10. Let us help one another, therefore; let us build the city together,
11. Where the best future might inhabit, and the true promise of humanity be realized at last.”

1 thought on ““Aren’t ya gonna read some words over him, Bret?””