I Am Not A Non-Believer
by Ron Steelman

I haven’t been religious since I was 13, and I was faking it before that. A favorite family story was that I was thrown out of Sunday School when I was five years old and had to have a special babysitter while my parents both sang in the church choir. I’m not sure what behavior I exhibited to cause the church ladies to exorcise me from their basic training camp, yet it did seem to presage my later philosophical development. By thirteen I had pretty much decided that I didn’t believe in gods, although as time went on I honestly did try to believe a number of times. I even attempted praying during those crises that life presents.

For most of my adult life I  traveled a long bumpy road searching for answers to life’s big questions. I scrutinized a variety of religions and alternative belief systems, hoping to find something out there that would lead me to that mythical inner peace and a sense of oneness with the universe. Ha! That’s certainly a big order and not surprising that I was getting nowhere in my quest.

As I questioned more and more people about their beliefs, many would say, “You know, I’m not religious, but I’m spiritual.” Unfortunately, most people couldn’t explain what they meant by ‘spiritual.’ Most discussions included vague notions of the soul or of God or of their superstitious half-hearted beliefs in various forms of supernatural gibberish. The bottom line with many of this crowd was simply that they’d rather sleep in on Sunday morning. It was clear they never spent more than five minutes thinking about what they really believed. Thus, they did not have any useful answers for me.

Finally, I discovered Humanism on the Internet, and that’s where this story really begins. Once I understood Humanism, which is a philosophy, not a religion, I was able to come out as an atheist. Yes, I am an atheist, not one who can prove there is no God, but rather, one who simply doesn’t believe in one. More importantly, however, I’m a Humanist. Unfortunately, when I engage in a discussion with people who are religious, they are so hung-up on the fact that I don’t believe in their God, that I never get a chance to explain what Humanism is. Not believing in God seems incomprehensible to them. So much so, that they sincerely ask, “How can you believe in nothing?”

They’ve been taught that not believing in God is so evil that they may be in danger standing next to me. They’ve been told that atheists are the cause of every ill in the world. “Without God, man would turn into an animal, raping, killing, and pillaging.” To prove my point, I Googled this topic and found the following quote from the Pope in a news report. . .a quote from just yesterday: 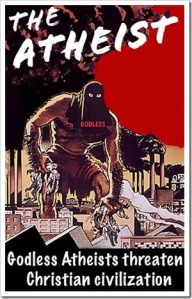 . . .”God’s absence”, the Pope argued, would lead to violence and even concentration camps, because denial of the Divine “corrupts men, deprives them of restraint, making them lose their humanity.” By contrast, said the Pope, use of violence in the name of religion would only be “an abuse of the Christian faith.”. . .

A correspondent’s response within the same article:

. . .”We remind Benedict XVI”, Carcano continues, “that no war was ever fought in the name of atheism, and countries with the highest number of atheists are also those where the crime rate is lower.” About the concentration camps, “they are the result of the thousand-years-old Christian anti-Semitism. Adolf Hitler believed in God, while atheists were persecuted by the Nazi regime. The slogan of the Third Reich’s army was ‘God with us’: as Ratzinger should know, having served in Hitler’s military.”

We can’t take the Pope or his accusations seriously. They are not based upon reality.

The other question for atheists that comes up frequently in discussions with religious folk (they must all be taught this question in Sunday School starting at age 5):  “Since you don’t believe in God, how do you get through the night?!” Rejecting their innuendo, I answer: “By sleeping.”

All one needs to do to squash this kind of prejudice is visit the American Atheists website and/or the American Humanist Association’s website to discover that we non-believers espouse ethics, morals, and values that are exemplary.

I am NOT a non-believer. I believe in the philosophy of Humanism, which belies the accusations against non-believers: (this from American Humanist Association) “Humanism is a progressive philosophy of life that, without theism and other supernatural beliefs, affirms our ability and responsibility to lead ethical lives of personal fulfillment that aspire to the greater good of humanity.”

Question: How do I get through the night? Answer: Dreaming of ways to lead an ethical life, one that might make a better world for all of us.

1 thought on “I Am Not A Non-Believer”